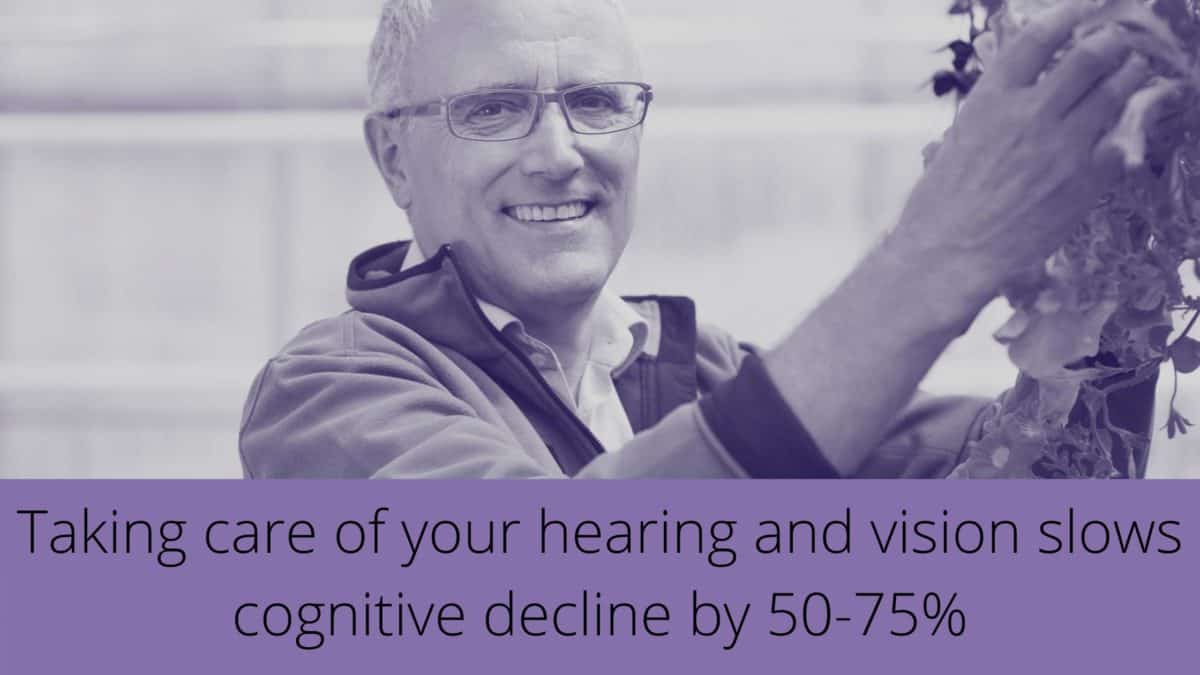 We tend to overlook the ways in which different aspects of our health are interconnected. Like did you know that hearing and vision can impact overall brain function and health? Research shows that conditions like hearing loss and blurry vision can contribute to cognitive decline. This highlights the importance of prioritizing hearing health as well as vision which can slow cognitive decline by 50-70%!

Extensive research reveals a significant correlation between untreated hearing loss and cognitive decline. A major study that investigates this link was published in the  Journal of the Alzheimer’s Association in 2019. Researchers evaluated 10,107 people over an 8-year period who self-reported their hearing status. Participants did not have any cognitive concerns when the study began. Over the duration of the study, researchers found that cognitive decline was:

The findings from this study show not only a significant correlation between both conditions, but also that the severity of hearing loss increases the risk of experiencing cognitive decline.

Researchers suggest that the lack of stimulation produced by vision and hearing loss is what contributes to cognitive decline. The lack of nerve stimulation can contribute to the following:

Additionally, a major effect of hearing and vision loss is social withdrawal. Hearing loss reduces a person’s capacity to hear and process sound which produces a range of symptoms that make conversations difficult to engage in. Similarly, difficulties with vision can make it challenging to navigate public spaces and social settings. Experiencing discomfort, stress, and barriers to conversations often causes people to avoid social interactions altogether. This means spending less time with others, not engaging in hobbies and activities, and skipping out on social functions. Social withdrawal contributes to loneliness, anxiety, and depression. This also means less stimulation and engagement for the brain which can contribute to cognitive decline.

Prioritizing your vision and hearing health can significantly reduce your risk of developing cognitive decline. You can take the first step today by scheduling appointments for a vision and hearing test. Conducted by a hearing healthcare provider, hearing tests involve a noninvasive and painless process that measures hearing capacity in both ears. This identifies any impairment, the degree, and specific type of hearing loss that you could be experiencing.

The most common treatment for hearing loss is hearing aids. These are electronic devices that are designed to absorb, amplify, and process sound which provides significant hearing support. Hearing aids maximize hearing capacity, allowing people to hear and communicate with greater ease. Research shows that hearing aids strengthen cognitive capacities in addition to transforming overall health!