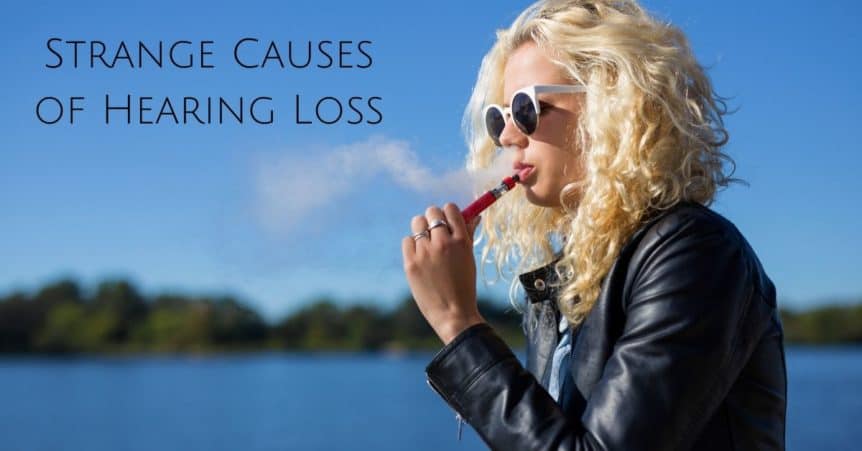 The subject of hearing loss is becoming more and more common as a health issue. Though you may be well versed in the common causes of loss of hearing, there are a number of unique cases that also can cause the health issue. For example, a recent case study from the University of Alberta had revealed that a balloon popping close to your ear causes as much hearing damage to a person’s ear as a 12-gauge shotgun being fired in the same vicinity! In what other cases can loss of hearing damage be executed? Please read below, we list seven of the unusual hearing loss scenarios.

Believe it or not, the act of cigarette smoking carries the possibility of increasing your chances of loss of hearing by an astounding seventy percent, whereas being exposed to consistent second hand smoke can raise the risk by close to one third. The reason is because the chemicals that are within cigarette smoke – which includes but is not limited to arsenic, hydrogen cyanide and formaldehyde – have the capability of executing irreversible damage to both the hair cells that reside within the inner ear and also damage to your middle ear. These ear components are responsible for transmitting sound information to your brain.

A study showed some statistics which revealed that about seventeen percent of drivers or passengers that are part of accidents in vehicles lose their hearing, provided that the airbags had to be deployed. A related study from Japan also discovered that the level of noises given out by deployed airbags are at an increase of as much as twenty percent higher than the level of noises that are normally capable of loss of hearing which is permanent. Even though airbags have the high possibility of saving lives, in certain cases your hearing can become severely damaged.

Shingles, or the medical name herpes zoster, occurs often in the range of people that are sixty and older. This condition can possibly affect the ear’s hearing via a medical condition that is named Ramsay Hunt syndrome. This particular syndrome has the ability to cause loss of hearing that is severe in the ear that is affected. However, if timely treatment is given, then the chances of the loss of hearing being permanent can drastically lessen.

When one has measles, possible ear infections can be a complication which normally occurs in one out of ten cases. Unfortunately, these types of infections can notably cause damage, which can further lead to the loss of hearing.

The use of drugs based on Platinum, which are used very commonly when chemotherapy is executed, can greatly increase any risk of cancer patients having loss of hearing. The Oregon University of Science and Health had a study conducted, which found that sixty one percent of patients that were treated with drugs based on platinum had unfortunate loss of hearing occur.

Loss of hearing is two times as common in people diagnosed with diabetes than individuals that don’t have the condition, states a study conducted by The Association for American Diabetes. Also, there’s an approximation of forty percent of patients with diabetes reporting certain forms of the loss of hearing, while ten percent of people with the prediabetes condition also report symptoms which are similar.

The condition of hearing loss does occur quite naturally as you become older, however being exposed to these unique risk factors can most definitely increase the process dramatically, and unfortunately can damage your hearing condition irreversibly. It is important to have your ears checked on a regular basis, like one would have their eyes checked on a normal schedule as well.

If you’ve noticed changes in your hearing and struggle with communication, contact us today. We provide comprehensive hearing health services and we’re here to help!