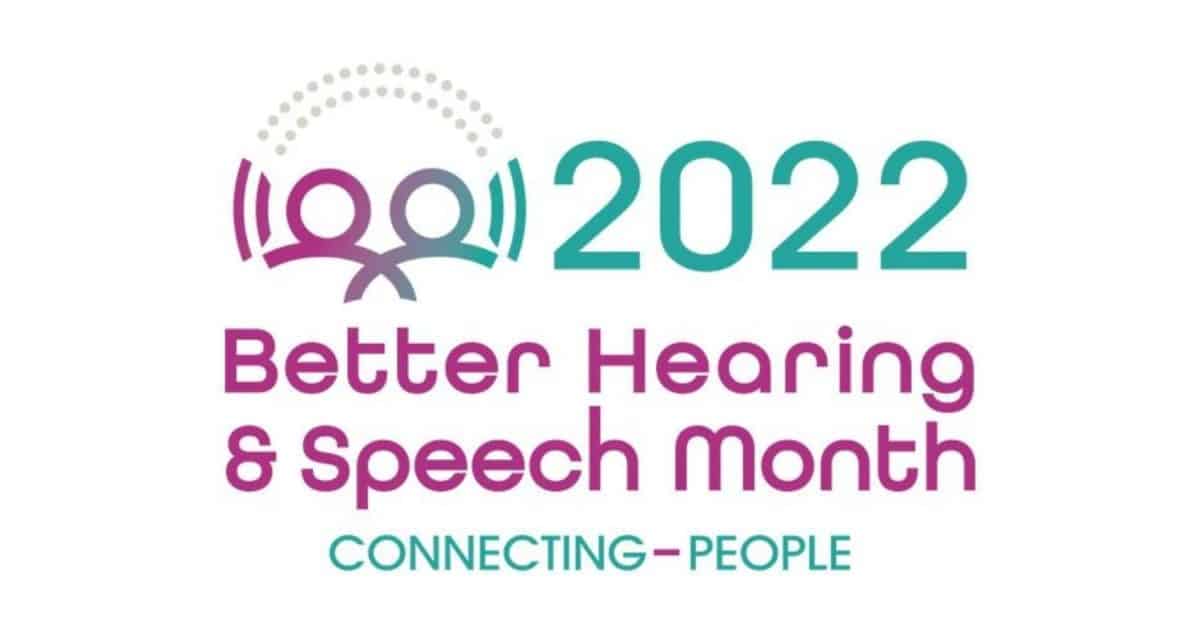 With the arrival of May, hopefully, you are getting out more, getting more time outside, and connecting with friends. It’s been a difficult couple of years for relationships everywhere. With social distancing and pods becoming the norm, to uphold public safety, many of us have had to navigate life feeling lonely and isolated. Loneliness has long been called an “epidemic” and “public health crisis well before COVID-19, quarantining and social distancing made things more extreme. However, after two years of distancing it may feel difficult to get back into things, especially if you have an unaddressed hearing loss.

Commonly underestimated, hearing loss is a serious health condition that starts with trouble hearing the people and sounds in your life and quickly escalates into a cascade of health effects such as depression, anxiety, isolation, cognitive decline, and a greater risk of falls. This and every May is Better Hearing and Speech Month, a campaign led by ASHA (American Speech-language-Hearing Association to raise awareness of the far-reaching social and health implications of hearing loss and other communication disorders. ASHA aims to raise awareness around the importance of the treatment of hearing loss on a personal and intuitional level. This year’s theme “Connecting People” could not come at a more apt time.

Hearing loss often develops slowly over years. At first, it often begins with the loss of high-frequency sounds such as a microwave beeping or birds chirping. Slowly it erodes your perception of certain consonants such as “f”,”h”, or “s” leaving small holes in sound. While we hear with our ears, we process sound with our brains. Our brain is forced to work overtime even for casual conversations with close friends and intimate partnerships. This can erode what may have seemed like the closest of relationships giving many people the feeling of loneliness, even when together. It’s important to remember that this doesn’t only affect you. Hearing loss affects the people who care for you and love you in deep ways and can leave you feeling more inclined to self-isolate than connect. Even so, it’s important to choose treatment instead. One Dutch study estimates that every decibel drop in hearing ability increases the odds of becoming severely lonely by seven percent in people under 70. However, with the use of hearing aids, the effects of loneliness can be mitigated.

Social isolation, often instigated by mobility issues or hearing loss is a risk factor for diseases such as a 29% likeliness of cardiovascular heart disease, a 32% chance of stroke as well a higher likeliness of premature death. A study led by Cigna found that loneliness has the same impact on mortality as smoking 15 cigarettes a day. The survey, conducted by the health insurer Cigna, found widespread loneliness, with nearly half of Americans reporting they feel alone, isolated, or left out at least some of the time. In addition, it was determined that lonely people are 50% more likely to die prematurely than those with healthy social relationships.

Connection Between Loneliness and Cognitive Decline

Researchers suspect that loneliness can increase the risk of developing dementia by 50% later in life. No one knows exactly how or why dementia starts but once it does it is irreversible and degenerative. Because of the increased likeliness of loneliness that often accompanies hearing loss, it becomes imperative to take hearing loss seriously. One theory is that loneliness raises stress hormones and inflammation, which both often contribute to dementia. Another theory revolves around the isolation that hearing loss often contributes to. When people begin to avoid social interactions, more and more regularly, the brain becomes less stimulated regularly. This has often been associated with brain atrophy and faster rates of cognitive decline when compared to contemporaries with normal hearing.

This May use BHSM as a call to action. Don’t let hearing loss affect the quality of your relationships and threaten your health. Schedule an appointment for a hearing exam with us today. We can help find the best solution to keep you feeling connected and heard, for years to come.